This December, we invite you to celebrate the Kangaroo Apple Season as we bring the festive spirit to Yarra.

Garrawang is one of the seven seasons of the Wurundjeri Woi Wurrung, when the kangaroo apples flower, the wedge-tailed eagles breed and the days are long and the nights are short. We have lighting and decorations across our three town halls and six events for you to drop into.

Carols in the Rotunda

Thursday 9 December, 5pm
Yarra’s Garrawang Festive Program kicks off with special guest Casey Bennetto who will MC the concert. He will be joined by The Yarra Voices Choir accompanied with performances from some of our wonderful schools across the municipality.

Friday 10 December, 7.30pm
Miyake Taiko is a 200 year old Japanese drumming style from Miyake island, near Tokyo. Australia Miyake Kai was established in Melbourne in 2012 and now has practice groups in Sydney and Cairns. As you are going to see, Miyake Taiko is impressively powerful and captivating. Players swap in and out to maintain a continuous rhythm that ebbs and flows with intensity. It stands out from other taiko styles by its repetitive and powerful beat. The booming sound of drums vibrates through the audience's body. To achieve this, players use their whole body to make each sound.

Saturday 11 December, 5pm
All are welcome at this concert in the heart of Collingwood. The event will start with a ‘Welcome to Country’ by Wurundjeri Elder Uncle Colin Hunter followed by some deadly music and storytelling from Songman Uncle Bart Willoughby, Lauren Sheree, Deniece Hudson and Uncle Dave Arden. There will also be a free barbeque and visit from Santa.

Songs in the Square

Sunday 12 December, 4.30pm
Tripod and Eddie Perfect bring their comic and musical mastery to Richmond’s vibrant Barkly Gardens to add extra silliness to the season. With a performance from the mesmerising Soul Singer Bumpy a proud Noongar female artist, plus Richmond Primary School.

Sunday 12 December, 11am to 2pm
Go for a wander by the Yarra river and you might find yourself experiencing something strange and fabulous, courtesy of performance duo The Huxleys. ‘The Huxleys’ Love Boat' will be a roaming, waterborne performance throughout the Yarra Bend area. Both fantastic and ephemeral, be sure to bring a picnic to your favourite riverside perch and enjoy the show! Various viewing locations up and down the Yarra between Dights Falls and Chandler Highway, with a great vantage point from the Fairfield Boathouse or the Fairfield Amphitheatre.

Singers on the Steps

Tuesday 21 December, 6pm
Bring your Christmas spirit and join us for an evening of acapella music featuring Makepisi, Key Tones, Living Out Loud and more…

Projections, lighting and new public artwork can be found across Yarra during the festive season. Head down to Richmond Town Hall, Collingwood Town Hall and Fitzroy Town Hall to discover the magic.

NICK AZIDIS is a new media artist and projection illusionist specialising in large-scale projections in both digital and analogue mediums. Beginning as a painter in the late ‘80s to late ‘90s, Azidis turned to projection art as a way to create "leave no trace artworks", which he has been making for 30 years. There is a direct link with the content Azidis creates in his projections and his painted works, yet it could be argued the impermanent nature of projecting art only adds to its ephemeral beauty. He has compiled a diverse body of work over three decades as a producer, content developer/creator and technician. Azidis is interested in storytelling and creating eternal memories and aesthetically beautiful pieces that transform a viewer’s perception of their surroundings with a blanket of luminescent designs.

‘Celebration Banner’ is a festive inspired artwork created by Anthony Romagnano, an emerging artist from Arts Project Australia gallery now located at Collingwood Yards. Consisting of figures with strong outlines and blocks of vivid colour, the banners recognise the holiday period as a time of spreading joy and cheer by gathering with loved ones and friends. Romagnano’s artwork reflects the vibrancy of the season and is sure to brighten up Yarra during this festive time. 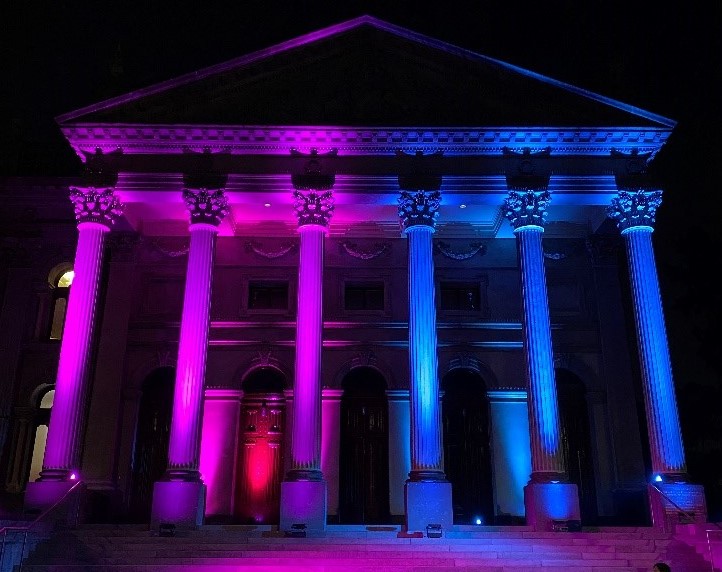 Fitzroy Town Hall's Classical Victorian design dating back to 1873 is a statement of the aspirations and burgeoning wealth Melbourne was experiencing during the gold rush era. For the festive season, we are lighting Fitzroy Town Hall’s façade to bring the festive spirit to Yarra. Find the work after dark between Friday 10 December and Monday 20 December.

Garrawang is one of the seven seasons of the Wurundjeri Woi Wurrung, when the kangaroo apples flower, the wedge-tailed eagles breed and the days are long and the nights are short. This year, Garrawang covers both our Festive Program and New Year's Eve Program in Yarra.